Who is Kyle Jamieson? About Cricketer

Standing tall at 6 feet 6 inches and nicknamed Killa, Jamieson is a dynamic, enthusiastic as well as versatile pacer from Auckland. At 6’6″, he is one of the tallest fast bowlers in cricket. And like most people who send a cricket ball down from such awkward heights, he is known for getting awkward bounce.

He was born on 30 December 1994 in Auckland New Zealand. He is the son of Michael Jamieson and Sheryl Jamieson. His father is a former cricketer who had played for Papatoetoe Club in Domestic cricket.

He has a two year younger sister named Brittany Jamieson. He did his schooling at Auckland Grammer School. Later, he attended Lincoln University through a scholarship and finished his graduation with a Bachelor of Commerce in the year 2019.

A right-arm fast-medium bowler and useful lower-order batsman, Jamieson is six feet eight inches tall, the tallest person ever to play international cricket for New Zealand. He started out as a batting all-rounder, but in 2012, he was slowly converted to become a bowler under the tutelage of bowling coach, Dayle Hadlee, brother of Richard Hadlee.

He made his Twenty20 debut for Canterbury on 4 December 2016 in the 2016–17 Super Smash. In June 2018, he was awarded a contract with Canterbury for the 2018–19 season. He had started his cricket career as an all-rounder nut he eventually ended up playing as the main bowler of his team.

He was part of New Zealand’s squad for the 2014 ICC Under-19 Cricket World Cup. On his very first match of the World Cup, he picked four wickets and scored 29* runs against Sri-lanka. However, it didn’t help his team to win the match.

On April 2, 2014, he started his List-A career for Canterbury for playing against Wellington in Ford Trophy. He didn’t get a chance to bat in that match, also he failed to get a wicket that day.

The same year, on October 25, he made his first-class debut against the same team in the Plunket Sheild. Later in 2016, he made his t-20 debut against Central Districts. Like his previous two debuts for Canterbury, he failed to get any wickets here too!

Later in 2018, the 2.03m tall cricketer moved to Auckland from Canterbury. According to him, he wasn’t feeling comfortable there because of the negativity around him which ultimately affected his nature and game on the field.

On 1 January 2019, in the match between Auckland Aces and Canterbury Kings in the 2018–19 Super Smash, Jamieson took the best figures by a bowler in a T20 match in New Zealand, and the third-best figures ever, when he took six wickets for seven runs from his four overs.

In October 2020, in the second round of matches in the 2020–21 Plunket Shield season, Jamieson took a hat-trick against Central Districts. In November 2020, Jamieson was named in New Zealand’s Twenty20 International (T20I) squad for the series against the West Indies.

He made his T20I debut for New Zealand on 27 November 2020, against the West Indies. In January 2021, Jamieson took his best figures in a Test match with 11 for 117 in the second Test against Pakistan. In February 2021, Jamieson was bought by the Royal Challengers Bangalore in the IPL auction ahead of the 2021 Indian Premier League.

First thing in the life of Kyle Jamieson

All the things given below are Kyle Jamieson’s very favorite things that we have collected by looking at online and news magazines and wiki.

Due to his magical spell, New Zealand won their maiden ICC Trophy. In the first inning, he took five wickets of Rohit, Kohli, Rishab, Ishant, and Bumrah. He took the crucial wickets of Virat Kohli and Cheteshwar Pujara in the second innings.

The game was being played in Southampton, England. The day 1 and day 4 were wasted by rain. Despite the rain, he was the headache for team India since he had made his debut against them. he had taken. he had only played 8 test matches which includes 5 times five-wicket haul. There is no doubt that this player will be a headache for all batsmen in the future.

His Car collection is not available yet. We will update it soon.

1. The only player to take 5 Wicket Haul in World Test Championship Final.

3. Held the title of man of the match in the debut of his ODI Cricket against India on February 8 2020.

4. Jamieson joined Michael Clarke for the record of hitting most no. of sixes on test debut and that was 4 sixes. 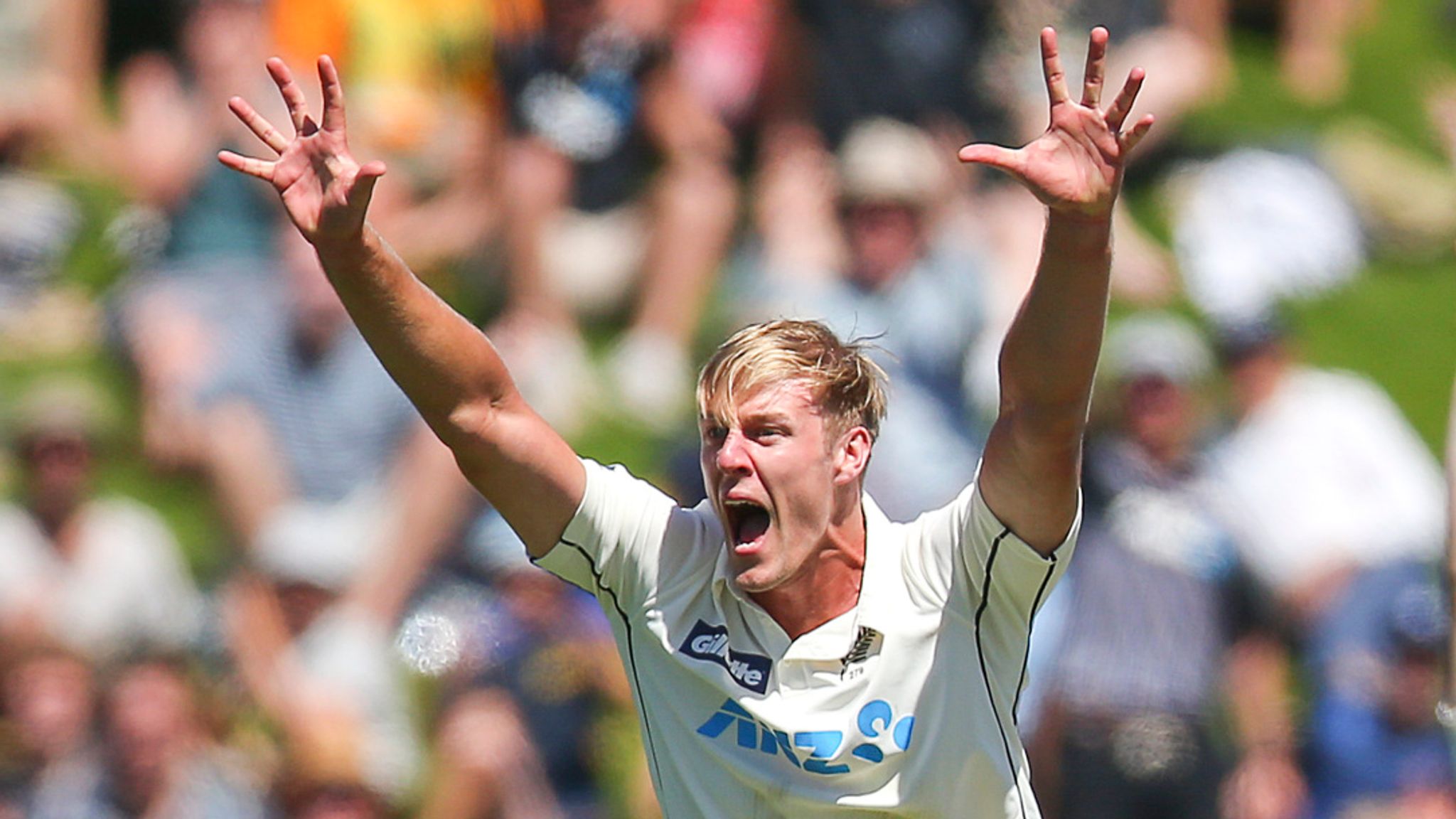 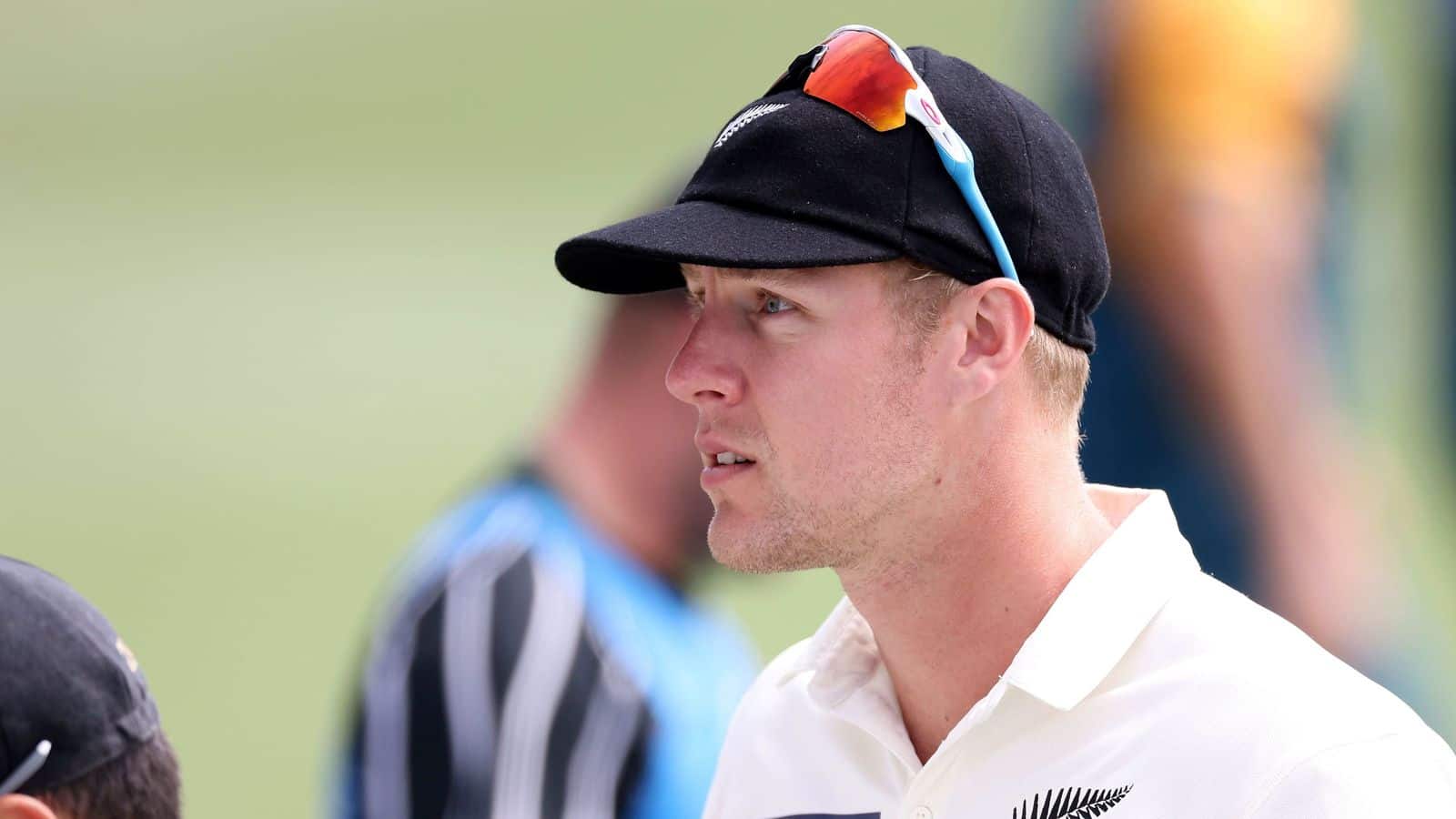 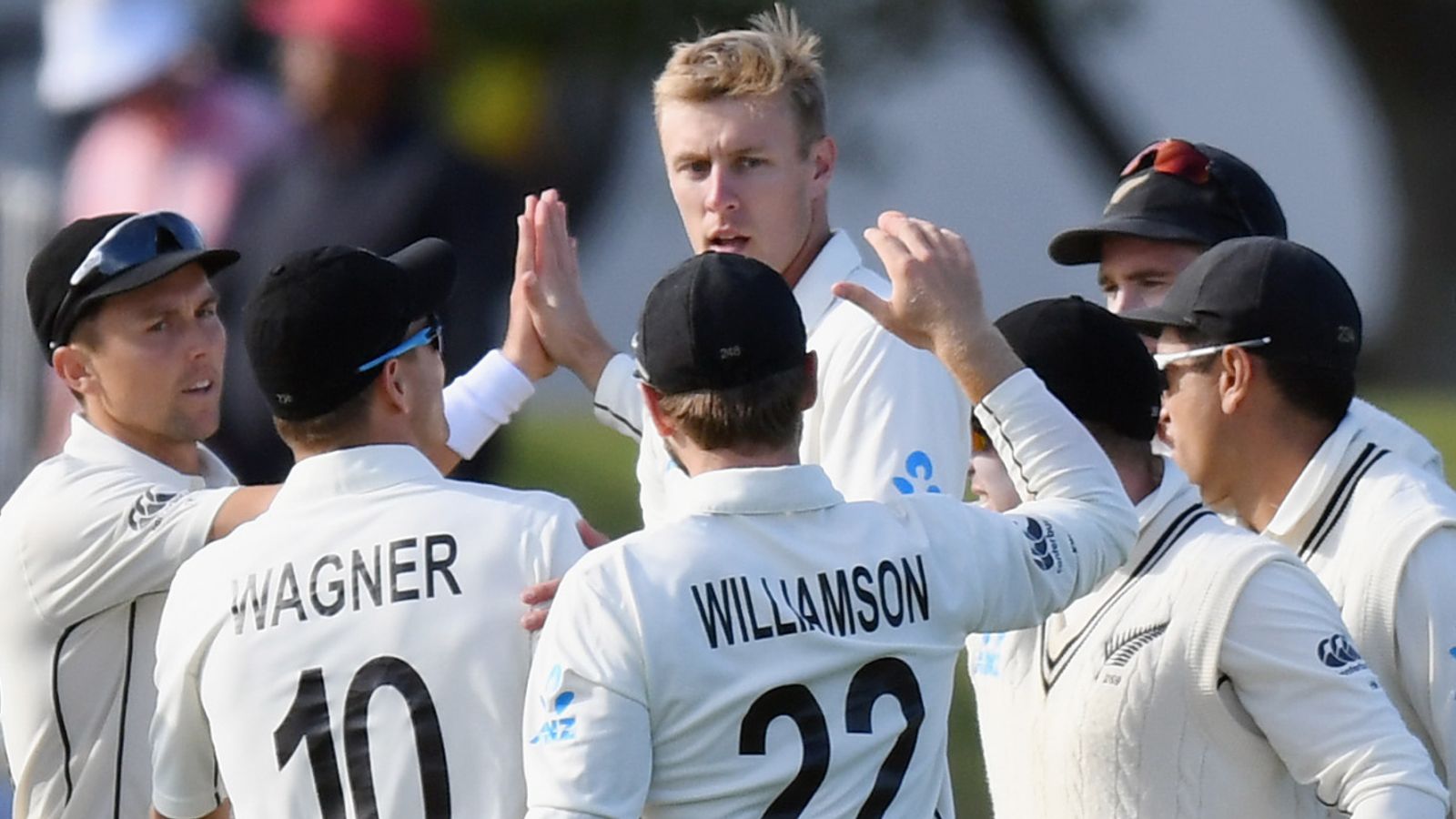 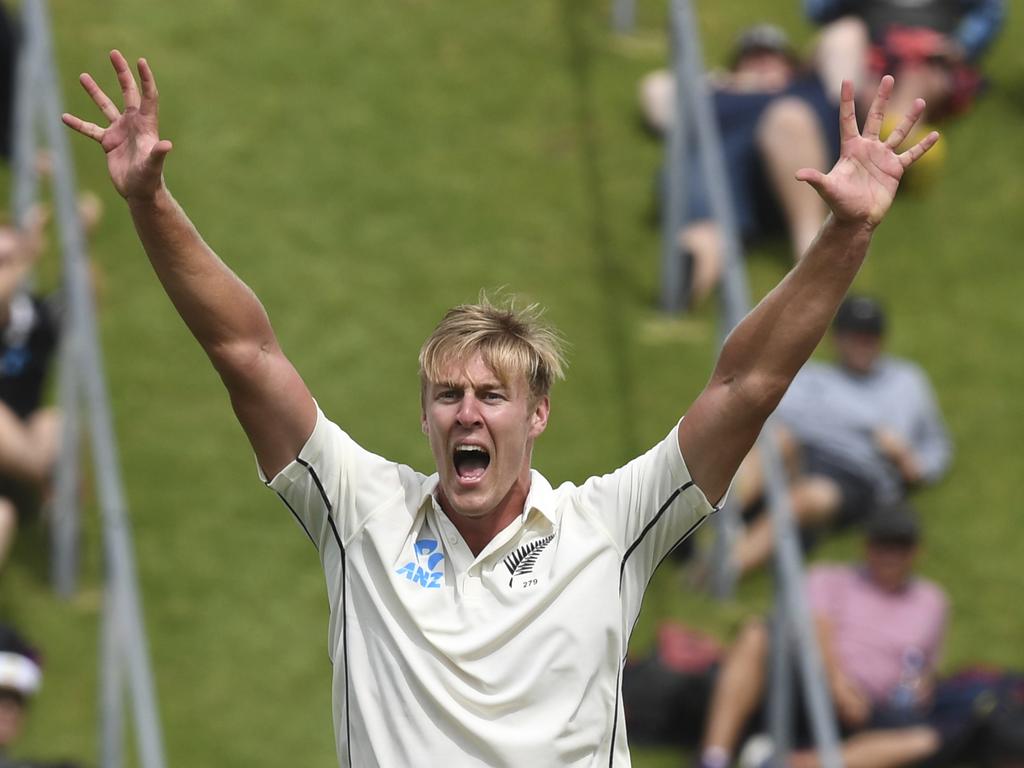 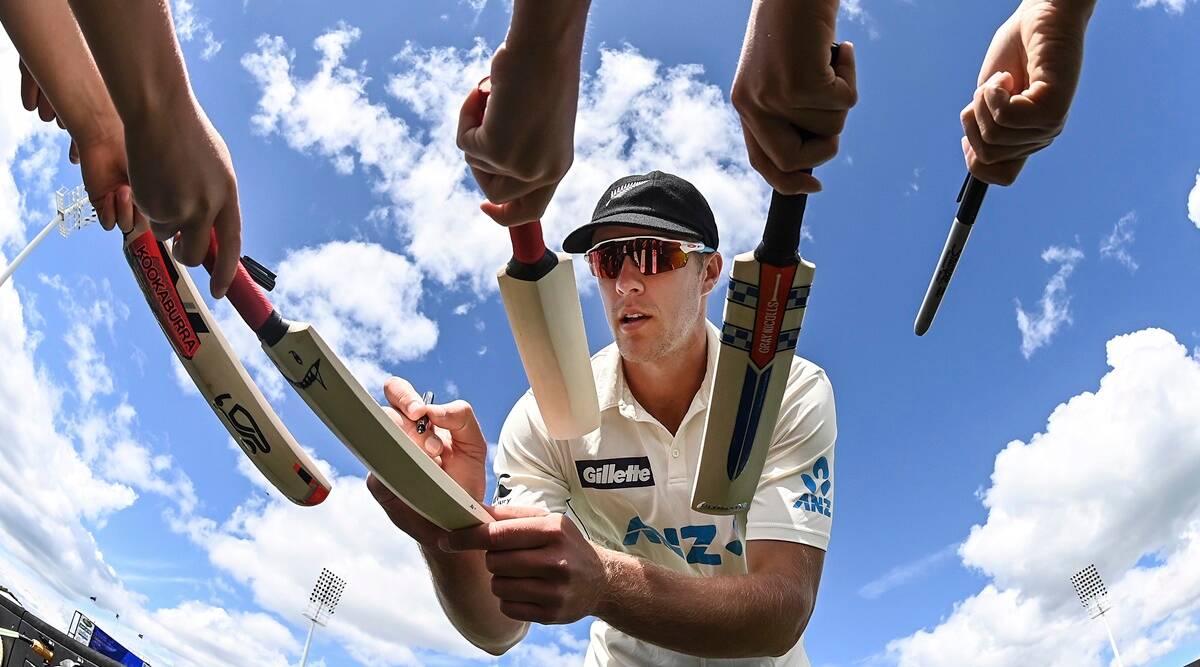 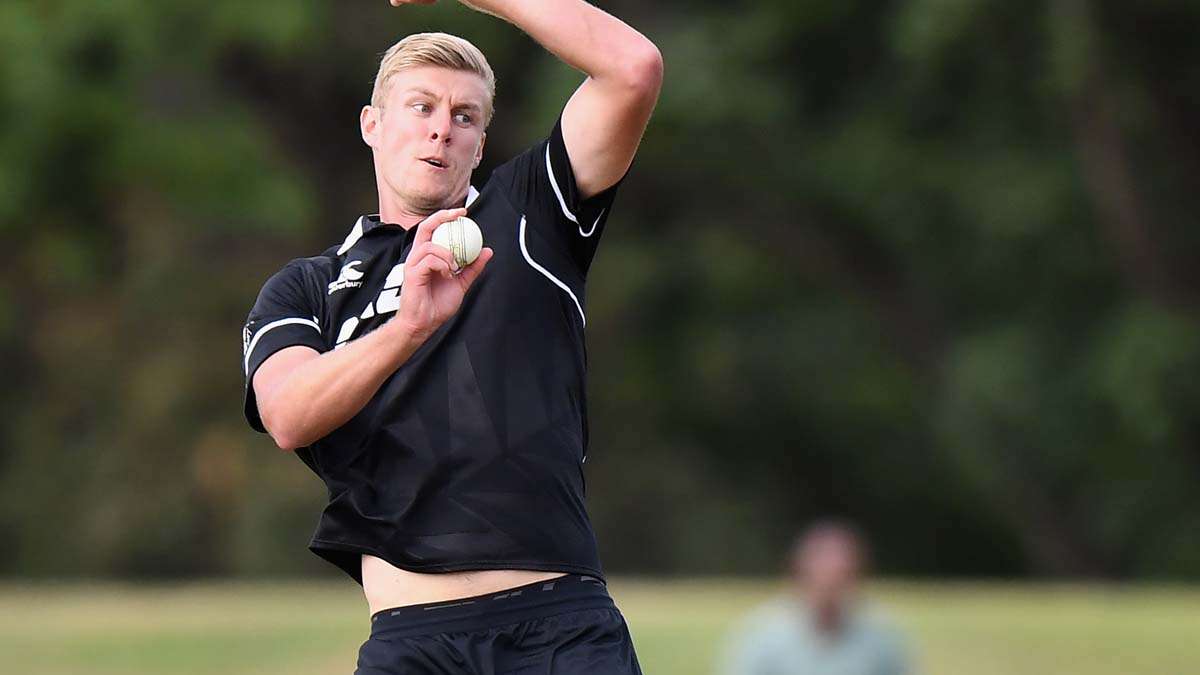 When I was growing up I was a batter so I dreamt of getting a hundred on debut. So not quite there today.

“When you have to work, work with a smile.”

“I am jealous of my parents. I will never have a kid as cool as theirs.”

“To me, cricket is a simple game. Keep it simple and just go out and play. “

“Actually nobody can be perfect in cricket. Everybody makes mistakes. It is important to learn from your mistakes and correct them.”

Did you know about Kyle Jamieson Facts!!

1.Jamieson is the tallest Kiwi Player.

Jamieson’s height helps him a bit more while bowling. He is 6 ft 8inch. He is the tallest New Zealander to play international cricket.

2. Jamieson has a century in List-A Cricket.

While playing a List A match for New Zealand XI, Jamieson scored an unforgettable century. He scored 101 off 108 balls with 2 sixes and 16 fours. He got retired hurt but helped his team a lot with an epic inning.

3. Jamieson got the man of the match for WTC Final.

In the history of 144 years of test cricket, Jamieson was lucky to represent his country in the first-ever World Test Champion Final against India.

Jamieson had just played 7 matches of test cricket before WTC Final, but his impressive performance made him part of New Zealand’s playing XI. He continued his performance and dominance and got 7 wickets in that historic final where it was 5 wicket haul for him in the first inning. He got the title of ‘Man Of The Match’ in that historic Final.

Jamieson became the most expensive New Zealand Cricketer in IPL History. He was sold to Royal Challengers Bangalore at a huge amount of INR 15 Crores.

Jamieson debuted for New Zealand in test cricket on February 21 2020 against India. He took his first ever wicket of Rohit Sharma. He also took the wicket of Virat Kohli in that match.

He was bought by RCB 3 days ago when he debuted in the test. Then, he took the wicket of the RCB skipper. It was a dream debut for Kyle Jamieson.

Who is the wife of Jamieson?

Jamieson is unmarried yet. But his girlfriend is Emma Hartland.

What is the qualification of Kyle Jamieson?

How tall is NZ Kyle Jamieson?

Jamieson is 6ft 8 Inches. In fact, he is the tallest New Zealand International cricketer.

Does Kyle Jamieson have sibling?

He has one sister. Her name is Sheryl Jamieson.

Who is the Coach of Jamieson?

Gary Stead is the Coach of Jamieson.

What is the Jersey number of Kyle Jamieson?

How old is Jamieson?

For how much was Jamieson sold to RCB?

Who is the first wicket of Jamieson in Test Cricket?